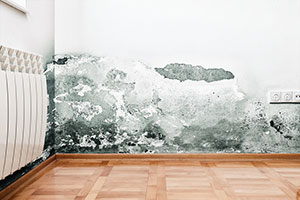 Molds belong to a larger biological classification called Fungi which represents a large percentage of the world’s biomass. We have lived in and among molds since the beginning of time. In fact, without molds our very existence would be in question. Molds are routinely used in the production of many foods and beverages. Molds are in buildings, being deposited there during construction. Molds are on clothing, being deposited there while walking around. And molds are in the dirt outside busily doing their job breaking down cellulose. Molds’ primary function in our ecosystem is to break down cellulose. Unfortunately, many of the building products commonly used contain cellulose. Some examples of cellulose containing building products include the paper on drywall, wood structural framing and carpeting.

Where molds and humans collide is when these simple organisms digest cellulose. Molds do not need sunlight as plants so. Molds gather their energy and nutrients by digesting cellulose. During the digestion process fungi secrete enzymes into the nutrient source to break down complex compounds into simple compounds which are then taken up by the fungi. Additionally, molds also secrete compounds to defend themselves from other organisms. Humans sometimes get caught in the crossfire as they become in contact with the microbial toxins known as Mycotoxins.

Mycotoxins are chemicals made by molds which can, under some circumstances, be injurious to humans upon ingestion, inhalation or dermal contact2,3,4. The best known mycotoxins (until recently, Stachybotrys) are the toxins from poisonous mushrooms.5

Mycotoxins are large, complex molecules.6 There are thousands of mycotoxins and all of us are exposed to toxigenic molds every day-both indoors and outdoors. At high doses mycotoxins can affect a variety of metabolic processes.7 Mycotoxins consist of many diverse compounds produced by a wide variety of molds.7 A single mold may produce several different mycotoxins; conversely, different mold genera may produce the same mycotoxin. Mycotoxin production for any given species is highly dependent on growth conditions such as nutrient availability, temperature and humidity.4 In other words, the fact that potentially toxigenic molds were found does not mean it was producing any toxin. Moreover, when one says that a toxigenic mold was found in a home or office—that is no surprise! In fact, it is expected since hundreds of common, every day, harmless molds are capable of producing thousands of mycotoxins.

Media coverage has caused mold to threaten owners of rental properties (commercial and residential) throughout the state and the nation. From New York to Los Angeles the media has been releasing a scare on mold that mimics the asbestos scare back in the early eighties. The problem with the coverage is that it has created a panic without expressing proper analysis or an objective treatment of the situation. The majority of media coverage leaves no reasonable and/or prudent treatment for an individual to follow up. The phones of environmental consultants that specialize in microbial investigations ring frantically each time a broadcast is aired, or a property receives front-page coverage with headlines that read “Building Occupants Forced to Evacuate,” “Mold Chasing 270 From Apartments” or “Mold Plagues Building Owners.” With constant coverage like this it makes it difficult to separate the true nature of the problem from hysteria. This type of hysteria creates litigation that ranges from building defect to negligence.

There is a litany of potential causes of action available to the plaintiff, including but not limited to, negligence, professional malpractice, strict liability, breach of implied and express warranties, construction defect, unwarranted eviction, workers compensation, violations of the Americans with Disabilities Act, breach of contract, fraud, failure to disclose in sale of property, and violations of the Unfair Competition Act pursuant to Business & Professions Code Section 17200 et. Seq.8

Because Americans spend 75% to 90% of their time indoors they are exposed to a variety of indoor air pollutants that the Environmental Protection Agency (EPA) claims may have between 100 and 200 times the actual amount of pollutants found in outdoor air.9 Lawsuits arising from indoor air pollution typically involve both personal injury and property damage components. Personal injuries caused by indoor air pollution fall into three categories: Sick Building Syndrome (SBS), Building-Related Illness (BRI) and Multiple Chemical Sensitivity (MCS).

The term “Sick Building Syndrome” (SBS) is sometimes used to describe cases in which building occupants experience acute health and discomfort effects that are apparently linked to the time they spend in the building, but in which no specific illness or cause can be identified. SBS is different from “Building Related Illnesses” because BRI refers to an illness brought on by exposure to the building’s air in which the symptoms of diagnosable illness are identified (e.g., specific allergies or infections) and can be directly attributed to an environmental agent in the air such as Legionnaires disease and hypersensitivity pneumonitis. A small percentage of the population may be sensitive to a number of chemicals in indoor air, each of which may occur at very low concentrations. The existence of this condition known as “Multiple Chemical Sensitivity” (MCS) is a matter of considerable controversy. MCS is not currently recognized by the major medical organizations, but medical opinion is divided and further research is needed. The access to the disabled and workers compensation regulations for people who believe they are chemically sensitive may become concerns for facility managers.10

It is not uncommon, especially during the rainy season, to encounter mold/fungi in homes and buildings. Mold is found everywhere, indoors and outdoors. It is common to find mold spores in the air of homes and growing on damp surfaces. There are a number of factors which influence the growth of mold: environmental humidity and moisture content of materials, temperature, air circulation, light and the chemical composition of potential substrates. Additional sources of indoor moisture that may cause problems are flooding, backed-up sewers, leaky buildings, humidifiers, persistent plumbing leaks, steam generated in the kitchen during cooking, shower/bath steam and leaks, poor housekeeping practices, wet clothes, clothes dryers vented indoors and combustion appliances not exhausted to the outdoors.

There are a number of things you can do when faced with mold in your buildings and moisture prevention is the first step. It is important to regularly check moisture condensation on windows, cracking of plasterboard, drywall tape loosening, wood warping, and musty odors. If you see any of the above, seek out and take steps to eliminate the source of water penetration as quickly as possible. In all situations the underlying cause of water accumulation must be rectified or mold/fungal growth (amplification) will recur.

By establishing a maintenance routine that eliminates moisture on a regular basis and by generating consistent emergency response actions to water infiltration situations, a building owner or occupant is more likely to eliminate any ramifications from mold growth. It is also proactive to send pamphlets to the building occupants advising them to report leaks, use hood ventilators when cooking, wipe up water from shower overspills, report visible mold immediately, etc. With a pamphlet asking for the tenant’s assistance, you should be able to reduce occupant-related moisture issues which make up some 20% of all microbial investigations.

With personal injury and property damage mold claims increasing over the last years, mold litigation has followed right along and is now dominant-and the number of claims, parties and money involved with no end in sight. As scientific and medical issues associated with mold evolve, so will legal strategies. Today the focus remains on testing, remediation, causation and coverage issues. What is certain is that the media and the public continue to focus on indoor mold. As such, it is certain that mold litigation is here to stay and will only continue to expand.

We have inspection teams throughout the United States. Our immediate service area for our San Jose location focuses on central California, including the following cities:

We also have more locations in Los Angeles and San Diego to serve Southern California.